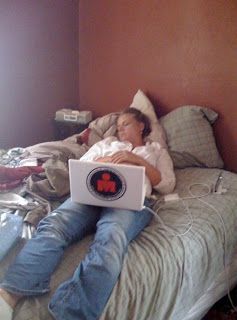 There is nothing quite like an IM training- huge omelet (with mushrooms, feta, scallions and Gruyere with a side of hash browns topped with home made salsa)-beer- induced Sunday nap. aaaawwwww. Just enough exhaustion to ignore the pile of clothes waiting to be folded, the dishes that need to be washed and ......

Training for a second Ironman is mentally so much easier. There is no wondering, can I do this? I know I can. And, I know I can again. The pressure falls off when it's "just do". The miles are adding up fast and happily sans injury, more or less. I have a massage therapist and a chiropractor to thank for this. One year ago I broke my tibia and tore my ACL. The doctor wasn't terribly optimistic about my iron endeavour. He said it takes six months to a year to recover just to walking with an injury like mine. He explained the MRI doesn't lie. He doesn't know Trimama. It's been a long 12 months, the first 6 were quite hellish, but here we are. I figured if Adrian Pederson can do it, so can I. It's not like I want to play running back in the NFL, I just want to race an Ironman :-)

Tac has worked his sexy little backside off making work, work in a staggering economy, so as we approach the October 1 abort date, we are both satisfied that we can go forward with our little trip in November. We've been on the fence all summer trying to arrange priorities and playing the financial guessing game, waiting to decide if we should go or not go. We are almost to the point of no return; we've reached iron giddy. What is it about this race that just excites one to participate? It is fantastically unique, and perhaps that is explanation enough. I doubt it. Something to ponder as I train this week. It's a long bike week, so I will do a spin, a short bike and a century ride (Friday) Then the next week I will run a marathon because I need another endurance challenge before Arizona to shake out any mental obstacles that might be waiting. Then a few more weeks of alternating 4 mid distance brick training days and the sprint/century week right on up to taper. I swim 2500 in intervals in a pool once a week and do 3600-4000 yards in the old lake once a week. Might I add that this weeks low temps in the 40's is going to make that lake swim rather gritty this Thursday. Uggh. Can you say polar cap? She was right at 61ish this past Friday.

Friday is Homecoming! Go Skippers! The High Schooler (as HG shall henceforth be named) is going with a group of friends to the dance-gulp. At least that was the plan. And I need to go dress shopping-holy cow when is that going to fit into the week? Pictures to post on Face Book- because Blogger just stinks for pictures now.

So, that is it in a nutshell.

Poke me or ping me or in some other way let me know if you are going to be in Arizona- I can't wait to see old friends and meet up with new ones.

Thanks for asking and have a good one.
Posted by tri-mama at 7:31 PM

Danielle in Iowa in Ireland said...

Nothing better than a post-omelet nap. :)
Looking forward to following along for the rest of the ride.

I love the photo- all IM tuckered out!

Wish I could be there with you!

And I love the pic, too.

Thanks! (I SHOULD have been the first one to comment since I was the one pressuring for info!)

You sound SOLID in mind and body!
Can't wait to see you in November!
xoxo Cheryl

I will give you cell and where we are staying (I am coming up with a fellow teacher friend who has volunteered for t-shirts and medals at the finish line!)
soon!

Sounds like you are well on your way to another awesome Trimama Ironman finish! That nap scene looks awfully familiar.

This is for you:

adrian peterson has nothing on you trimama!!!