Miracle kids tri-beyond description. So inspiring, I'll let the kids say it in their own words tomorrow. 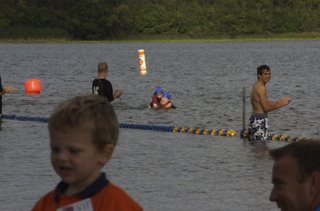 Hero One: This kid rode the back of his mentor through the swim, then completed the bike and run. There was another kid who completed the race with cerebal palsy-wow, just plain wow!

Hero Two: This is my friend Stephanie, who would shoot me for posting a pic like this, but her name needs a face. 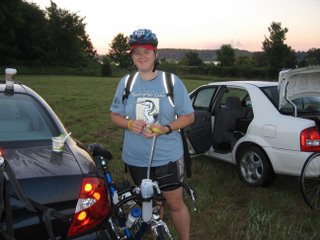 This is Steph's second year of racing and she consistently shows courage and determination in every race she takes on. Pigman was her "A" race for the season and huge for her. At mile 50, after a bike course that had me in tears, Stephanie watched a water stop girl scramble for a loose bottle on the road, and didn't see an oncoming motorcylce. The man on the cycle swerved to miss her but lost control of his bike and flew off to the road. Steph, a nurse, jumped off her bike to help, and stayed with the man bleeding by the side of the road, with his wife who had been following him in her car, the man cracked his helmet, his head and died on the scene. HG and SG were sitting with Steph's sister when she came into T2, still covered by this man's blood, explained to her sister and race officials what had happened and then proceeded out on the run. She finished the course in a little over 9 hours (including the time spent with the accident) That my friends is heroic.

We have a birthday party to go to at the grandparents, so more to report then.
Posted by tri-mama at 4:01 PM

Two heros indeed. My hat goes off to both of them. I am so sorry to hear there was a fatality at the race.

I would have not been able to finish. I know that I would have been a wreck after watching somebody die like that.

Holy cow. So sad about the motorcycle rider...

The sport of triathlon never ceases to amaze me...

definitely two heroes in my book.

how sad that that occured. it just goes to show that triahtletes have huge hearts for people and have perspective about whats important in life.

Makes you wonder though, how many drivove right by.

Yikes. I had no idea the motorcycle accident was that serious. I read about it on the club mailing list, but didn't know the details. Stephanie is indeed a hero!

can i say that both of your posts today made me cry? both in a good/bad way...very moving...