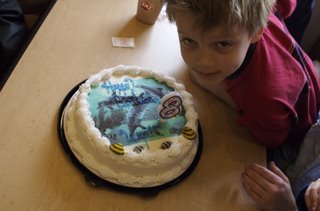 It was Standing Long Jumps (SLJ) 8th birthday Sunday. He got a bike (went the less expensive route since he wouldn't know the difference) "I've got shocks!" "I've got gears!" It was boy nirvana. They had a soft tail model, so the "Green Goblin" looks pretty tweaked. He needed a new helmet so I picked one up at the same time. However I didn't notice the name of the helmet at the time. - The Missing Link

How sublime for a big sister when she can tease younger brother without him knowing he is being called a half step from Neanderthal. It's in the ball park of "SLJ, your epidermis is showing!" He promptly moved to transform her into a rabbit with his new magic set. Grandma and grandpa went the cheap route too, as the wand just didn't produce the desired result.


Sunday is family breakfast day, or brunch as it were. It's the only meal of the day so it's generally met with gusto and enthusiasm. Add a family birthday and we're talking the lalapalooza of Sunday breakfast. I generally zip over to the store after church to pick up the fixings and buy food for the week. Today as I backed out of the driveway Trihubby yelled to tell me some friend was going to call me so turn my phone on. Some mysterious friend, and he had no idea who it was.---riiiigggghhhhtttttt. It took about 10 seconds to figure out that I was on deck to be the "Surprised" triathlete of the week on podcast. Fortunately, it only took another 10 seconds before THE CALL arrived, because if I'd had a chance to think about it, I probably wouldn't have answered the phone. Not that I don't want to talk to Iron Wil and Kahuna, I'd love to sit and chat with them for hours. They are two people who have had more positive influence in my life than any one in at least a decade. Because, while I have many friends and aquaintances, triathlon has introduced an absolute paradigm shift into my life. So, the concept of actually talking with Wil and Kahuna made me nervous as hell. Recall my instant stupidity when meeting Jesse Stensland. When I grow tired while swimming I think, "keep moving Iron Wil wouldn't stop" or when the idea of biking intimidates me (like now because my bike just doesn't fit right and I feel like a massive crash waiting to happen) I think "Kahuna wouldn't back down now". If I don't train, if I don't push, I don't get the opportunity to stay on this great team. Of course I could still blog, but for me, being a part of the team is doing more than sitting in the bleachers. Kahuna and Iron Wil are the anchor and the rudder (they can fight over who is which) for me, because they started it all, and they lead well. Kahuna asked me why I got into multisport-you can listen to the podcast for the rest of that story- but the real answer is why I stayed in multisport.

It's because I love it! I love being on this team. I love reading all the blogs and seeing all of the challenges taken and challenges conquered. I love seeing the creativity and commitment as we all contort our lives to pursue these endeavors. Triathlon isn't all of life, but it just seems to make all of life better.

So, I did answer the phone and we had a lovely chat about a variety of topics such as cooking faux paux, man busting manatees that make the ocean a frightening place, training, taxes, tattoos and tequila. There is a good chance that the hair on Kahuna's cochlea is still lying flat, so it might be worthwhile to listen to that segment during an intense hill workout. At least for my part, it felt like depth charge intensity, but that might just be due to my excitement.

Saturday was a double workout to make up for missing Friday, so I did 3000 yards in the pool, pleasantly surprised that my improved hand entry moved that time back to 55 minutes. I've let go of some of the drill training and returned to simple form swimming, and it feels good. The pool was crowded so the swimming was SOS like. Circle swim with constant snaking around bodies. I like the extra chop in the water that swim lessons and kids jumping into the pool provides.

Well said about multisport and blogging. Accountability and enjoyment...it really does make the rest of life more enjoyable. Can't wait to hear the podcast this week!

I just got back inside from lunch. It's *gorgeous* out today! I absolutely cannot wait to get off work so I can go do my brick this afternoon.

I think I will be there on Wednesday. I was there last week and there was a pretty good turnout. It was a tad cold, though. See you there! :)

happy b-day SLJ. Eight is a terrific age. Live it up.

OMG, you totally made me cry...

Trimama - I should''ve been reading your blog the past six months. The mere ease with which you describe your workout and then 5 mile run is inspiring.

I plan to continue training, thus, I'll continue readin' your blog (and listen to the podcast)...

Keep it up, mama.

I'm right there with you for the parts about staying with it because you love it, and I totally think stuff like "Iron Wil wouldn't quit now" when I'm having a tough time!

Hey Trimama, just came across your blog. Hope to see you guys at IMFL. It will be my first IM so I am excited. Got a Half IM stop along the way in a few weeks, FL Half IM at Disney.

Great post. How unique that a mom from Minneapolis and a dad from Texas both start and remain in multisport for so many of the same reasons--and that it can be shared. Maybe that's what makes blogging so cool.