Snow??? Now that could be a problem 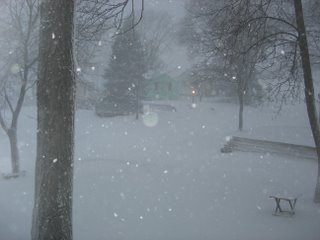 My final century ride was scheduled for Friday of this week. However, we have out of town guests for the weekend, so I moved the ride to Wednesday. That was until I saw snow in the forecast.

Excuse me, I'm training for an Ironman here.

So, I moved my final "long" ride to yesterday. It was 42 degrees when I set out. But, there was no rain, and variable winds, so all in all, the ride went well. I took my "flat" loop that winds around the city, which takes me on a bike lane through the downtown area. You exit downtown and head back out into the first tier burbs. I was still within smelling distance of the city sewer gas when I almost ran smack into three deer. 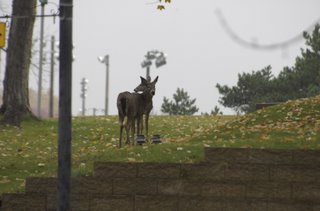 I saw them on the path from about 50 yards out, and they had no intention of moving. So I yelled. And they looked at me as if I had a 1000 watt halogen strapped to my head. Well, they were encamped near downtown. Between the cabbies, the homeless people and the stressed out, they are probably used to crazy people yelling at them.

They didn't move. I don't think they even blinked.

I considered a run at deer bowling.

So, I crossed to the other side of the path and rode on by, close enough to hear their breath.

I hear venison is a nice lean alternative to beef.

needs your help, please, a little intervention would be nice.

Swim/run today- oh I'm glad to be seeing the starting line that marks the end of training.

Happy and safe trails
Posted by tri-mama at 7:51 AM

Nice! A few months after I bought my house in S. Minneapolis, I called 911 one morning on the way to work because there was a deer browsing on the foliage in a neighbhor's yard. I was afraid it would wander out onto Park Ave and wreak havoc with traffic.

Your tough!! I was going to post how cold it was yesterday on my 10k run. Kinda shoots that, you riding 100 miles. Your gonna do great!!

We have deer and coyotes and cattle in the new burb neighborhoods where I do my flat loops. But no snow.

What you don't want to ride in the snow? hehe

Looks like you are finishing up just in time before it gets real messy out.

...must be a close one..or u can bring home dinner as well :D

Man, do I ever feel like a loser..this weekend is my last 112mile ride and i'm whining already because it's supposed to be cold..i.e. 52 on Sat...now I don't feel that bad!!

Hmmmm...snow, deer....maybe they were reindeer in disguise? Just getting in some practice before THEIR big show on 12/24!

There will be no snow at IMFL Florida. Maybe deer but no snow.

Can't wait to see you!

deer? snow? we must live on a different planet...

It's raining, this morning, with snow in the forecast for this evening.

At least I'm only loading the bike up for a presentation to some 9th graders (the first in a series aim at building a youth endurance team).

Snow makes things tough, especially if I want to ride the Pol-R Express. Soon, it will be all mountain bike.

we are all in agreement.

no swow until after Ironman!

Great job on a tough cold ride. I did hear somebody say after the IMWI race that somebody hit a deer on the course and still finished the IM. So if you see another one at IMFL you should be okay.

It's all in the perspective. You have snow and deer. We have haze and cars/buses/trucks in Singapore. :(

BTW, thanks for the jinx. Now, it's snowing here. You could have taken one for the team and kept the snow in your neck of the woods.