Congratulations, you smoked a fatty! 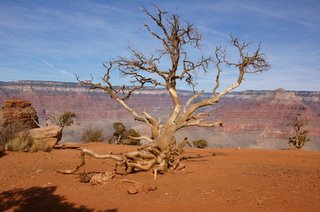 A rather large, in the linebacker sense of the word, guy in the starting corral had that scrawled across the back of his t shirt. I love self deprecating humor.

The tree has absolutely nothing to do with the race, but I liked the pic, it's my desktop right now.

But on to Chang's

First to say, if you ever have the opportunity, or can make the opportunity to race in another city, in particular a nice warm city in the middle of winter, make it or take it. Phoenix/Scottsdale/Tempe/Chandler/Mesa/Flagstaff are quite beautiful. I touched or walked on every patch of green grass I could find, sat under citrus trees, gazed at palms and just in general enjoyed the hills and mountains of the desert.

Note to fire marshall of Sedona at mile 9 that has lived in Arizona 25 years and never been to Grand Canyon and really doesn't think much of the red rocks:

You live in one of the most beautiful states in the lower 48, if you no longer see that aaaaaaaaggggghhhhh! I feel sorry for you. Enjoyed chatting with you. (more about him later)

Around August last summer I was staring at the calender and contemplating our 15th wedding anniversary. What to do, what to do? The e-vite to Chang's was in my email; question answered. I had just run a sluggish (or so it felt) 1:55 half, so I optimistically wrote in a 1:50 finish time for the flat, non humid Chang's course. That is how Trihubby and I found ourselves in corral #4 of like 20 in the half marathon. Posers in the midst of some serious runners, but there were other posers as well. The race was very well organized, particularly for only being in it's 4th year and hosting 33,000 runners. I imagine there were some marathoners who didn't feel so inclined while they sat on shuttle buses at 7:10 with a 25 minute ride to the start of a 7:30 race. Even less so the ones sitting in the mile crawl of traffic just waiting to arrive in the parking lots, only to join thousands in lines for the shuttle. But hey, the info brochure strongly encouraged runners to arrive early aka 6:30. If I was sitting in that traffic it would have immediately taken care of all pre race "issues" as I would have been sh#*ing bricks. Marathons are tough mental business, I can't imagine arriving that late to the start. But that is another story.

We had met up with Trihubby's sister who was running the half as her first race-ever! She brought two of her seven kids, the 12 and 15 year old boys. I had talked my sis in law into the race and I was thrilled that the boys came along for the ride. They had trained together and were ready to run.

I heard as we made our way to the corral. Someone else knows I'm here. Duh, hi Comm. How cool to run into each other in the sea of athletes. Good luck and all that. Now, I'm working on my competitive issues, so keep that in mind here. At dinner the night before we were talking about the race and what we hoped for finish times. Best case for me 1:52-about 8:30 miles. I was pretty serious about breaking the 2 hour point in the least.

Competitive chip kicks in. If he runs 2:20, I could have bragging rights to finishing before everyone I know in the race. Competitive chip is completely incompatible with common sense. Hello? four of the other runners have never passed the 8 mile mark. In case you are wondering, Trihubby and I do race in our tri's-it's fun, and it makes us go faster. Commodore has raced for a long time, but it's not exactly fair to compete against someone when they don't even know you are in a race. Since we were assigned to different corrals, we couldn't run together anyhow-but I bet we could have both pr'd if we had.

That is my problem with road racing these days (please give me wide berth here), I don't have a focus for the races. This kills me, because I love running. Allow me to explain. I ran the marathon last fall with some vague sense of what I wanted to accomplish, which for the most part was a finish so that I could sign up for IMFL. I had a goal time based on training times, but when the day came down, I just didn't care enough to compete with myself to achieve my goal. I finished the race and for the most part enjoyed all the atmosphere parts. But it haunts me to know I had a lot more in me that I just couldn't summon on that day. The accomplishment is just a little dampened because I didn't take the challenge seriously on that day. Now, I consider it a feat to finish in spite of my own counter productive thinking. I also happen to think that running that day mentally exhausted from one of the most hellish weeks I'd had in a long time is great training in the bank. Suffice to say, I'd like another crack at a marathon to see if I can do what I train to do. Someday. This might help explain the following split times and what I think about them.

While standing in the corral I was conflicted. Yea, yea yea for us, we are running today and it is a great day! I'm ready to run and enjoy all the scenery. The gun sounds and we are off. Actually, the gun malfunctioned, so the guy just yelled Go!

mile 1 8:20 whoo feeling good, fun band
mile 2 17:05 still feeling good-warming up bye trihubby who had a head cold
5k 27:10 not too bad at all, particularly because I stripped down and redressed in the middle of the mile to get the long sleeve shirt off-I seem to be doing that in races lately
mile 4 This is the rock and roll marathon, but the bands can only be heard for about 3 total blocks. I wish I had my ipod
mile 5 43:00 water stop time for hammer gel-nope, let's just walk through and do powerade/endurolyte-it was well mixed
10K 55:18 getting to half way-and

That is just so not helpful

But there is no music. There was supposed to be music and crowds. both were a little sparse.

Ok, you are in the long stretch, just run to the next stop light, and the next.

Gu packs in every variety. Gu packs that 15 year old nephew consumed X 6 or 7-he couldn't remember. No water-just Gu.

I took 2 squishes from 1 pack, with lots more powerade.

Hi Sedona Firemarshall. we talked for a quarter mile. Then I surged on ahead.

So, here is this guy who I've never met encouraging me in my race. What a selfish poo I've been. This is not why I train, or race or tri. No more looking at watch. No more pouty, I'm done running. There are cheerleaders to hi-five, and runners to encourage. It's amazing what you see in a race when you stop looking at your feet.

Mile 11 ran a quarter mile with Mike, a guy who is 3 years past cancer. Way to go Mike. ran alongside older couple-that's awesome. Ran behind guy with 6ft log on his shoulder running for his commrades in arms who had fallen for our country. Almost caught up with girl running in memory of a fallen soldier.

Mile 12 Ran across the bridge that looked really cool with it's lights in the morning.

BEER- 2 beers for each finisher. Good, cold beer. Only at ASU would they give you beer-oh and maybe Madison

I didn't break the 2 hour mark, but in retrospect, I hadn't really trained for that either. And I ran without my ipod-excellent race training. I enjoyed some new acquaintances. My sis in law and nephews finished with pride. Trihubby ran his first 1/2 marathon-whoo hoo and I got to hang out with a bunch of really great people.

Wow I am the first to comment on this. What a blessing. On with the schmutzing. You and your husband are really awesome. I wish you would move here cause there is no way I am moving there. I really wish I knew you were just a few minutes ahead of me or I would have caught up to you. I figured that many corrals and your projected time I had no chance at all.

As for me beating you...nah nah, you have to wait for Florida for payback.

Congrats again! I loved your race report. If I had a nickel for all the times I've said "I'm bored" during a race... well, I guess I'd probably have less than a dollar, but still!

Good to hear that you had a great time. And I'm sorry that you have to come back to our winter! :(

i want you next to me in Florida!... 'cause i wanna see that look in your face too!... unless you are relieving yourself in your wetsuit, 'cause then i could be standin' next to someone else -- no problem.

note to self: modify competitive chip re fellow bloggers, erase 'take them down' syntax, and replace with 'no one gets left behind!'

I love your comments on competition, they really struck a chord with me. Nice race and glad to hear you love Az so much. I grew up there and love it too!

Great report, felt like I was right there myself! And you came so close to beating da man. :)

way to go, trimama! it's nice that you got to enjoy some of the people and atmosphere of the race. you don't have to PR every time.

Wow- great report. I hope I never run into that fire marshall guy. I will KICK him out of AZ! He lives in Sedona??? (We mtn. biked there last summer and had a blast) and never been to the Canyon. If I don't see the canyon once a year I go through withdrawl! (Headed up to North Rim in May!)
Gald you had a great time and had a super race! (I was waiting for your post!!)

Welcome home. Just proves that if you haven't lived thru a midwest winter you have no perspective. Great job on the race. See at I-Moo!!!

Great running! Although I have to do a lot of mental math to follow your splits!!

The Performance Bike jersey is - surprise - not as nice as the photo looks, but I'll use it in spring and fall or for a layer in winter. I got a size large and the sleeves are still too short for me. :-( The fabric is kind of a loosely knit synthetic, same inside and out, not fleecy. The color is more like a vivid pink without being a neon hot pink. It seems like it will be comfortable, but I'm glad I didn't pay more than $25 for it.

Sounds like you ran such a good race! Great job!