Nothing wrong with that picture 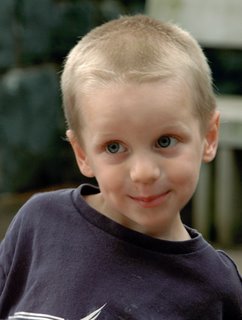 No pics to show, but BNB managed to slip this weekend and land entirely on his face. I thought at first that he put his tooth through his lip, but as it turned out, he only managed the biggest fat lip I've seen since "The Iceman" Liddell dropped his last opponent.

He cried for awhile, then worn from the trauma and the day, he fell asleep sucking his ice cube. When he awoke later, both lips were ballooned and crusted with dried blood.

"Mom, I don't think I'll ever be able to do that one thing again. You know when your mouth does that thing like this (making a circle motion)..."

"Yea, I'm never going to be able to smile again."

Oh the pain if that were true.

It took a couple days, but he got his smile back.

I wonder how many women out there know who "The Iceman" is besides you? Who'd have ever have guessed that you were a UFC fan??

OUCH! That has gotta hurt. My son broke his front teeth when he fell at two. Biggest guilt trip ever...

Awww the poor dear. I'm glad he is feeling better and that his smile works again.

Ouch, poor kid. Amazing how fast the mouth heals, isn't it? When I was reading your post I was like "Wow, is she talking about Chuck Lidell?" My husband would be so proud.

I'm glad he got his smile on again, b/c that pic is just too darn cute! Glad he's feeling better.

that is a great picture! what a cutie!

Precisely why I don't go downhill fast on my bike!
What a cutie he is! (Glad he is smiling once again!)

I was shocked to see another woman know the iceman! I used to watch UFC when I was into Brazillian Jui-Jitsu - those guys are hard core.

Your kiddo is totally adorable, and especially so with the lip (btw - the link isn't working, but maybe it's on my end??)

Hey-best of luck this weekend!
I sure don't have flowers this time of year...unless we have winter rains (which we didn't get!)
Enjoy the sun, warmth, and dry air!
:-)