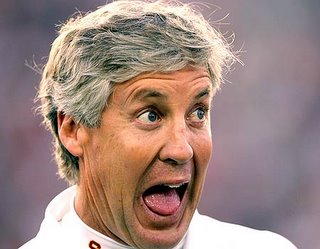 I was cheering for the 'Horns while I put in some bike time, because next to Colorado, I'd move to the great state of Texas in an instant.

The countdown to Chang's has been initiated. T-10 days and counting. We leave early next week, assuming Northwest doesn't file bankruptcy and shut the airline down. I am formatting a back up plan because it doesn't sound so good. Maybe Trihubby and I will Bonnie and Clyde the convertible we are renting and drive home. Since it probably won't be the Ford Mustang advertised, we will return it and our life savings to the car rental agency when we arrive.

I turn 40 in two and a half years and I've told Trihubby a thousand times that I want a '68 Ford Mustang, preferably convertible, for my birthday.

Hey, us Texans are counting the days until you moce the tribe down here! It's going to be 63 and sunny here today!

Well good luck to your team!! I know football..it's going to be here in a few weeks..that would be the SUPERBOWL!!

see you next week

Yea Texas!!! Hook em Horns!!!
Good luck in your race. I always wanted a 68 Mustang. My cousin had one with a 289 and 3 speed. I loved that car!!! I had to settle for a 98 cobra convertible. I only drive it in the summer. My 12 year old daughter has big ideas for when she turns 16. They are dreams and will stay that way. Oh by the way I gave in and added a cell phone to my plan for my daughter. SO, this means that your daughter in now the only 12 year old without a cell phone. LOL

Good luck at the PF Chang race in Phoenix! And while you are here, you should check the car ads- many older models of cars on the roads here (my x-mother in law had a baby blue mustang-not sure of the year, but older model-cute!)
Sometimes you can get a good deal!

good luck next week on the race. have a nice anniversary too!

ignore the Flatman, it will be 63 and sunny here tomorrow... come back to CO.

and, yea, that was a WHALE of a game baby! now everyone clearly understands why CU got wupped 70-3!

Football? U mean those guys in Europe where they kick the ball into the other guy's net :P.

Too bad I ain't a sports fan. Those games always last for few hours....i can watch those instead of renting movies.

I hate Flatman and Bolder. I have no idea when it'll hit 60 again here. :(

Good luck at the marathon! By the way, I think we're looking at 66 degrees on Sunday (I have a ride scheduled of course).