And this post has nothing to do with the port a potty and Kashi-that's why I entered two posts in one day-I didn't want to confuse my reading public. 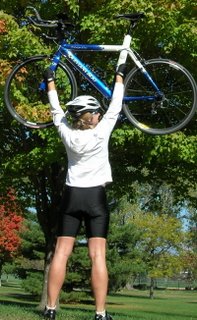 What I did was to ride my bike 4 hours and fifteen minutes. On Saturday. On the dreaded trainer. But I did it! I've never ridden a bike that long in my life.

I didn't think I could do it. I almost didn't rationalizing that there was no way in "H E double hockey sticks" I wanted to sit on a trainer for four hours. But a four hour ride was in "THE PLAN" so ride on we did. We because The Tribe joined me in watching a movie and watching the snowy rain fall.

I have this psychological container in my head that tells me I am not an endurance athlete, I am a sprinter.

A four hour spin is a fairly decisive blow to that container. I suppose you could say it's a few more logs in the fire that forges the iron.

You ARE made of iron.

I am not worthy.

Way to go! Your rear must feel like shredded cheese!

You can still be a sprinter. The Tour de France sprinters ride all day and they still sprint at the end and the non-sprinters don't. You either are or you're not I guess.

NICE JOB!! I need to add you to my list of mentally tough athletes... That's a crazy amount of time to ride a trainer. Excellent!

oh my god. I'm ready to put a bullet in my brain at 90 minutes on the trainer although I love long rides in the outside. You go girl!

Over 4 hours on the trainer? You are some kind of endurance stud. Great pic with the bike!

just awesome! and look at how ripped your legs are getting. lookin' good trimama!

Way to kick the trash out of that psychological container...now you can put something worth-while in there, such as "Four hours on the trainer? Check. What's next?"

Anyone who can spend that long on a trainer definitely gets "endurance" attached to any title they wish! I thought 3 hrs was going to kill me! Way to put in the time!

That is just awesome and crazy at the same time...!
One hour on the trainer is pure TORTURE for me. I guess you had some great songs on your ipod!
What mental and physical toughness-you are such a stud-muffin! :-)

Hardest was at hour 2 and 3. I was staring at the clock and it wouldn't move at all. I must have been in one of those space-time anomaly.

Herself, the GeekGirl said...

Go, you! The voice in my head says that I am not a sprinter, I am a couch cushion.