I hit the wall today, twice 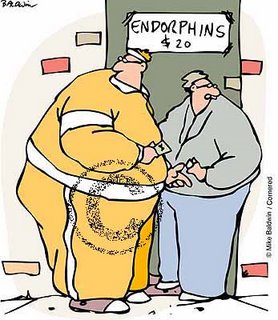 But not the metaphorical runner's wall-no, I hit the 4ft retaining wall that borders our driveway-twice. Can we all say, "depth perception"? Apparently I have none. Bumpers are overrated, so...oh, and Trihubby doesn't know yet. He's been nursing a killer abcess in his tooth-I think I'll let another day of antibiotics pass before trying to explain that one. The molar comes out tomorrow night and from what we understand that should spell the end of the pain.

I've been challenged to create a pithy little saying that encapsulates my triathlon credo, here are a few that landed on the drawing room floor.

As I worked my way through 2700 yards today it occured to me that my chest floats. That made me wonder if it would have floated more when I was nursing-cool-advantage Trimama. That led to me thinking about meeting Jessie Stensland and an inquiry as to whether her flight deck was fully loaded. I don't track that type of stats on athletes, but I have no doubt that her fellow competetor was "enhanced" . So, would silicon give an unfair advantage? I mean, beyond the bar scene. Do falsies lend more buoyancy that would make for an unfair advantage in the swim? Inquiring minds want to know.

At this point I will assure one and all that I am not drunk nor was I drunk when I hit the wall or while I was thinking about buoyancy.

No, not the recent favorite food of The Tribe, but rather that of the swim lane hogs that jump in your side of the lane and always seem to be standing on the ledge when you arrive so you run into them. There is just nothing worse than arriving at the wall three strokes from your last breath only to encounter technicolor booty. Oh, except perhaps running dead on into black banana hammock. Please tell me that's not some bizzre pervert angle-standing around in the shallow end of the lap lane hoping for a nasty grab. Someone is going to get hurt-that's all I'm saying.

No passing on the left

I've been contemplating my fluid intake and output during exercise and have decided: on the swim, yes, on the bike, no. I understand that some guys possess the uncanny ability for directional output on the bike, therefore--No Passing on the Left!!! and for that matter, the next person who spits on my shoe during a run is getting a wedgie.

aka "Ta Ta For Now", which is currently emblazoned on the back pocket of my tri club uniform. A little overly optimistic if you ask me, unless it stands for "Trimama taking forever now"

I think it's back to the drawing board-

I have a short 60 minute bike spin incorporating hills, followed by a 45 minute "pretty" run scheduled for tomorrow. Taking a cue from Pink, "I don't wanna be a stupid girl" I think I will run "pretty" on the trails through the woods-probably with The Tribe in tow, so it will be a stop at the manual car wash on the way home.

Oh, I dunno... The pig butts could get interesting if it was a young, nubile swimmer. OOPS, time to get my mind out of the gutter!

I must confess that I have hit walls and more while parking. Now I have a reverse sensor - works wonders and in my case probably paid for itself in 3 months (in avoided repair costs from collisions). ;)

Where did you get the cartoon? I love it!

Very funny post!!! And I don't even like Pink, but that video cracks me up! Have you seen it??? Sooooo true!

So, flip turn fast and hard, and splash water in their faces..(but I guess they are already wet, so it wouldn't matter that much. It's still a statement tho-)
Banana Hammock! That's a good one!
My daughter hits stationary objects (like parking garage pillars)too! And I have been known to hit the curb with the back wheel of the van as I turn corners. I blame it on being on a bike to often-it's much smaller, so I freak when I am in a large vehicle.
About the falsies- see Kahuna's latest pix on his site. She claims she is a triathlete. (?) She has huge flotation devices. Apparently he is going to interview her on a podcast. Maybe he will aske her for you!
But things like that, if they DO help you on the swim, surely slowo ne down on the run. I wouldn't want those things flopping around on my chest or coming back to hit me in the eye!

Nuts fe-lady has a point about that. It gets u out of the water fast but once on land, they will slow u down.

i used to hit our garage door. twice in 6 months. it's really bad when the repair guy says "didn't i just fix this panel 6 months ago?" yup.

Falsies may help in the pool, but they sure make the aero position uncomfortable on the bike and let's ont talk about the bouncing on runs. There's a reason most pro-triathletes are super lean. :)